We are now able to offer these exclusive 2015 LCSD Variants on our website.  Limit 1 per person. Marvel Entertainment
(W) Tom Taylor (A) David Lopez, David Navarrot (CA) Bengal
Limited Print – 500 copies
From Marvel Comics. Laura Kinney embraces her destiny. Here! Comes! Wolverine! X-23 was created to be a weapon and for a time, that’s all she was. But with the help of her mentor, Logan — the original Wolverine — she escaped that dark past. Tragically, Logan has fallen, but Laura will continue in his footsteps as a hero. Recent events have her doing everything in her power to keep those around her alive, as violent forces are hell-bent on mutual destruction. If anyone can stop them, it’s Laura. She is the best there is at what she does. She is the All-New Wolverine. 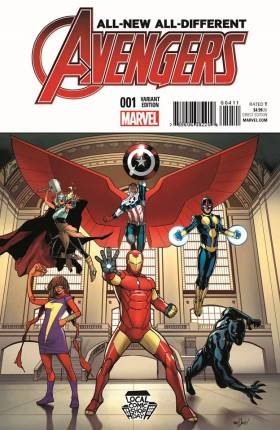 MARVEL COMICS
(W) Mark Waid (A) Adam Kubert, Mahmud A. Asrar (CA) David Marquez
The Avengers are dead — long live the Avengers! Earth’s Mightiest Heroes — Captain America, Thor, Vision, and Iron Man–are living separate lives, not tied to any team–but when a threat from beyond the stars targets our world, fate draws them together once more, alongside Nova, Ms. Marvel, and Miles Morales a.k.a. Spider-Man! Rated T+. 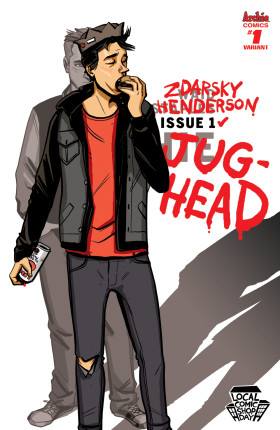 ARCHIE COMIC PUBLICATIONS
(W) Chip Zdarsky (A) Erica Henderson (CA) Chip Zdarsky
Limited Print – 750 copies
In the grand tradition of comic book reboots like Archie #1, Archie Comics proudly presents Jughead #1 from the comics dream team of Chip Zdarsky (Howard the Duck) and Erica Henderson (The Unbeatable Squirrel Girl)! Riverdale High provides a quality education and quality hot lunches, but when one of those is tampered with, Jughead Jones swears vengeance! Well, we mean, he doesn’t “swear.” This is still Archie Comics after all. 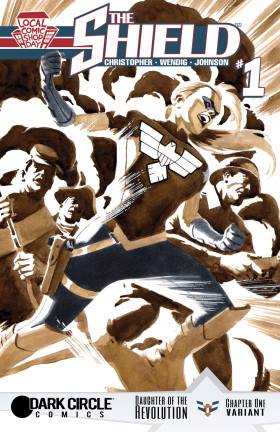 ARCHIE COMIC PUBLICATIONS
Limited Print – 500 copies
New ongoing series from Dark Circle! “Daughter of the Revolution”: Part 1 — Since the dawn of the republic, whenever her country faces its blackest days, she returns: a spirit of the revolution sent to fight for what is right. But when she reappears for the first time in a generation with no memories – not even of her own identity — and encounters an evil force expecting her arrival, all The Shield can do is run! 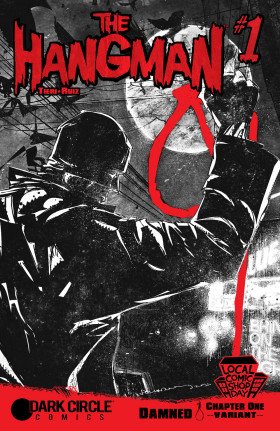 ARCHIE COMIC PUBLICATIONS
New ongoing series from Dark Circle! They say the Hangman is nothing more than an urban legend. A spook story told to scare criminals straight. But those who encounter him – like hitman “Mad Dog” Mike Minetta – know different. They know that when he comes for you, you’re dead already. Join fan-favorite writer Frank Tieri (Wolverine) and artist extraordinaire Felix Ruiz (Wolverine Max) for an ongoing tale of horror, the supernatural, and violence – and learn why some men may never be redeemed. AMERICAN GOTHIC PRESS
(W) Jeremy Robinson (A) Matt Frank (CA) Jorge Marrero
Nemesis is wreaking havoc all over New England, and she’s not even in her final stages! FC-P Investigator Jon Hudson is neck-deep in monster mayhem, but he’ll need luck convincing the authorities that it’s actually a kaiju tearing down buildings on the way to Boston. Meanwhile, people are going missing, bodies are turning up torn to shreds, and General Lance Gordon is showing some disturbing changes following a heart transplant from Nemesis herself. 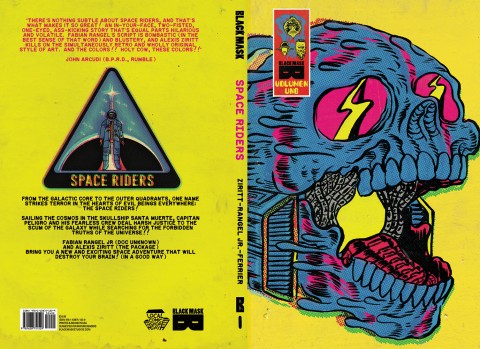 BLACK MASK COMICS
(W) Fabian Rangel (A/CA) Alexis Ziritt
From the galactic core to the outer quadrants, one name strikes terror in the hearts of evil beings everywhere: The Space Riders! Sailing the cosmos in the Skullship Santa Muerte, Capitan Peligro and his fearless crew deal harsh justice to the scum of the galaxy while searching for the hidden truths of the universe! Collecting the four sold out issues of the psychedelic revenge tale from the minds of Alexis Ziritt and Fabian Rangel, Jr!

BLACK MASK COMICS
It was recently revealed that Black Mask’s YOUNG TERRORISTS is not just a provocative, brain-dentingly awesome comic book, but it’s also stitching together a creator-owned shared universe featuring characters from an array of Black Mask books. When the story broke, it was described as “Young Terrorists is the Avengers of the Black Mask Universe”… which is probably better phrased than anything we could’ve come up with. This secret, limited edition box set brings together some of the core books you’ll want to know as Black Mask’s universe expands. The box set includes five books (three single-issue comics and two collected books) all with limited edition, exclusive, interlocking variant covers, as well as other exclusive, limited-edition items. BOOM! Entertainment.
(W) Grant Morrison (A/CA) Dan Mora
What’s to Love: Grant Morrison is one of the most prolific and best-selling writers in comics, earning a reputation for his ability to effectively revamp superheroes like Animal Man, Batman, and the X-Men. His creator-owned titles are also highly praised, including The Invisibles, Nameless, We3, and Joe the Barbarian, because no one tells mythical stories better than him. In Klaus, Grant reimagines one of the biggest cultural myths in history, and we could not be more excited to pair him with one of our homegrown talents, Dan Mora (Hexed)! What It Is: Set in a dark fantastic past of myth and magic, Klaus tells the story of how Santa Claus really came to be. Where did he begin? What was he like when he was young? Why does he do what he does? How does he do what he does? And what happens when he faces his greatest challenge? Drawing on Santa Claus’ wilder roots in Viking lore and Siberian shamanism-taking in the creepier side of Christmas, and characters like the sinister Krampus — Klaus is a “Santa Claus: Year One.” DARK HORSE COMICS
(W) Larry Hama (A) Marcelo Ferrerira (CA) Tony Parker
From Dark Horse Comics. The hit game franchise comes to comics! A prequel to the highly anticipated game, the Call of Duty®: Black Ops III comic book series follows an elite group of soldiers as they wage a secret war across a futuristic, war-torn world transformed by technology. In the bullet-ridden first issue, the team infiltrates Tashkent, Uzbekistan, to take down a double agent … but as they close in, they uncover something much more sinister at hand. Written by decorated comics veteran Larry Hama! 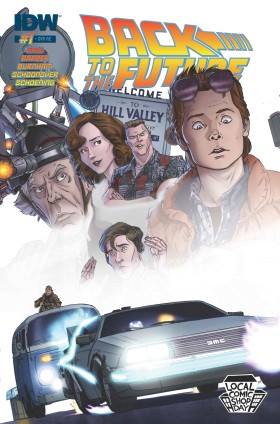 IDW
2500 copies
“Untold Tales and Alternate Timelines,” part 1: BttF creator/screenwriter Bob Gale returns with all-new tales from the twisting and turning timeline that made Back to the Future a, well… TIMELESS pop-culture phenomenon! Take a trip back to 1985 and be there when Doc Brown and Marty McFly first meet, and then jump even farther back, to 1945, to witness Doc’s involvement in the super-secret Manhattan Project. Bullet Points: • All-new canonical stories by Bob Gale, creator and screenwriter of Back to the Future. • Scripts by John Barber (Transformers) and Erik Burnham (Ghostbusters, TMNT), with artwork by Brent Schoonover (Batman ’66, Ant-Man) and Dan Schoening (Ghostbusters). • Part of IDW’s Artist’s Edition Month promotion! 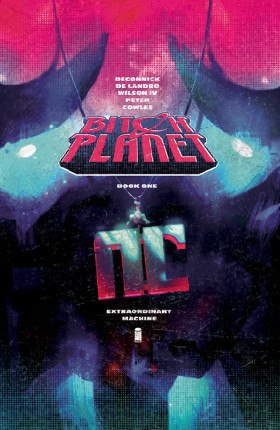 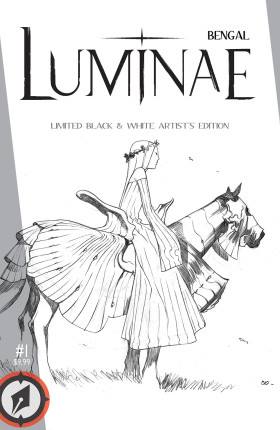 Magnetic Press
(W/A/CA) Bengal
Limited Print – 500 copies
Six young warriors are tasked with protecting the mysterious Luminae, a holy creature of Light in exile from those forces of Darkness that would decimate humanity. When one of the warriors disappears, the others know it is the sign of a superior evil soon to arrive. A stylish dark fantasy by the celebrated artist of Batgirl, Wolverine, Naja, and Meka. This special black-and-white “Artist’s Edition” features pages of uncolored pencil-and-ink artwork created for his original graphic novel Luminae, available in a complete, full-color hardcover. ONI PRESS INC.
(W) Jhonen Vasquez, Eric Trueheart (A) Aaron Alexovich, Megan Lawton (CA) Rob Guillory
Oversize 8.5″ by 13″
Zim and his filthy evil ways have been gone for what feels like years. And Dib has grown fat and smelly waiting for his return. But what if … all along … that was the plan? This special Local Comic Shop Day Treasury Edition contains not one issue of Invader Zim, but two! Zim’s long-awaited return and subsequent space travels are all here for your eyes, heart, and stomach to enjoy. 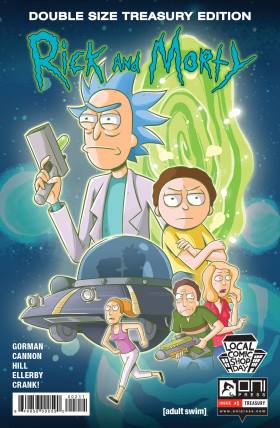 ONI PRESS INC.
(W) Joshua Hale Fialkov (A) Gabo (CA) Francesco Francavilla
Jude has been sent right back where he started: Purgatory. With no memory of his previous adventures or relationships, Jude’s existence is stark and empty. Yet, just outside his awareness, his friends — including the late, great Ernest Hemingway and a very tenacious preteen girl — struggle to free him. Because in the quest to overthrow God himself, the only person who stands a chance is his son. Jump into the series that Bleeding Cool called “one of the most original and entertaining comics of the past year” in an all-new first issue released in a deluxe edition for Local Comic Shop Day! 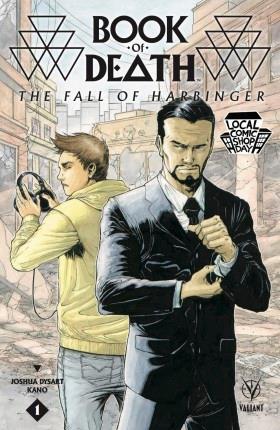 Valiant Entertainment.
(W) Joshua Dysart (A) Kano (CA) Raul Allen
Limited Print – 1000 copies
A showdown. An apocalypse. An ending. Many years from today, Peter Stanchek, the Renegades, the Harbinger Foundation, the Bleeding Monk, and Toyo Harada’s Imperium all reach their terminus, as the entire planet becomes the battlefield for the most devastating psionic combat humanity has ever seen. The Great Destroyer, long prophesied and foreseen, comes to Earth at last. Who will survive … and what will be left of them? New York Times best-selling writer Joshua Dysart (Imperium, Harbinger) and blockbuster artist Kano (The Delinquents) journey to the far end of the Geomancer’s Book of Death to reveal the final, unavoidable end for two of the Valiant Universe’s most powerful foes. 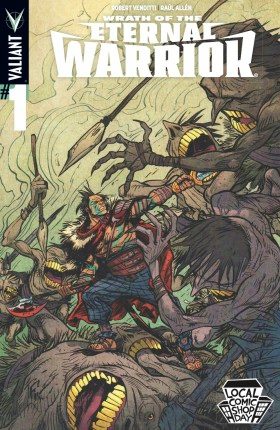 Valiant Entertainment
(W) Robert Venditti (A) Raul Allen (CA) David LaFuente
For five millennia, the Eternal Warrior has shaped history at the end of his sword. He’s razed empires, toppled civilizations, and broken armies as an immortal soldier in service to the Earth. But now, the Eternal Warrior has been torn from the world he once protected and finds himself stranded in a hostile alien landscape unlike any he’s faced before. Separated from his earthly environs, can history’s deadliest soldier survive a realm far older, far deadlier, and fare more ruinous than anything he’s ever encountered? Beyond Earth lies eternity … This November, New York Times best-selling writer Robert Venditti (Book of Death, X-O Manowar) and visionary artist Raúl Allén (Ninjak, Hawkeye) forge a new legend for Valiant’s master of war with an all-new ongoing series in …Wrath of the Eternal Warrior #1! 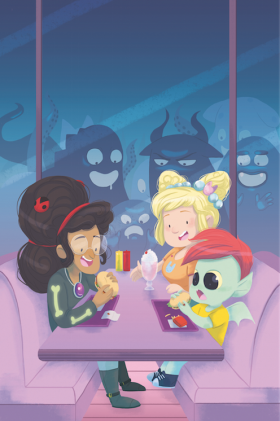 Z2
(W/A) Ian McGinty (CA) Margaux Saltel
Showside is just your average southern town, except that portals to the Nexus realm keep popping up and flooding the town with demons and monsters. The only thing keeping Showside safe is Kit and his friends Belle and Moon. From the writer/artist of Adventure Time Candy Capers and Bravest Warrior comes an all ages romp with a horror twist.